The UFC returns to Atlanta, Georgia on Saturday night, featuring one of the most highly anticipated main events in quite some time. Former Light Heavyweight champion “Sugar”…

You may have heard the UFC light heavyweight championship is up for grabs this Saturday night at UFC 145 in Atlanta Georgia. The…

UFC 145 Rashad Evans vs. Jon Jones: What Makes This Rivalry So Intense? History

Press release by The UFC

EVERY FORMER LIGHT HEAVYWEIGHT CHAMP PUMPED FOR ‘BONES’ vs. RASHAD

Jon Jones and Rashad Evans is a rivalry unlike anything we’ve ever seen in the UFC before. Hurtsbad MMA had a front row…

MMA in and of itself is an extremely compelling platform for hand to hand combat between some of the world's top athletes. A good…

Mixed Martial Arts Pre Fight Hype: Positive Or Detrimental To The Credibility Of The Sport?

The UFC has taken a lot of flak for the pre-fight hype associated with Jon Jones versus Rashad Evans at UFC 145. A lot of “purists” believe that the hype is created, or fictitious. Some…

He is deemed the future of MMA. He has never been “officially” defeated. He is considered one of the pound-for-pound best fighters in the world. He is the UFC LHW Champion. He is simply known as “Bones”.

He is Jon Jones.

That should give you a pretty good idea as to what the young UFC champ has to live up to every day he rises to begin anew. These…

Jose Aldo and The Weight of The UFC Belt

Jose Aldo is a name that strikes terror into the hearts of many featherweights in the world. He is the number 1 ranked featherweight in the world, with a record of 20-1 (12 KO’s), and is the former and last WEC champion as well as the current UFC Featherweight champion.

The mixed martial arts community is an extremely tight knit unit.  We have thrived as a community together.  This community has been built around conflict, so it is the very nature of the fabric of MMA that there are differences of opinion ranging from fighters, to the camps they train under, and the fans…

The potential for epic and historic greatness currently residing atop the UFC light heavyweight division is without a doubt a spectacle that all fight fans carry an opinion on. Many celebrate him, others question him but everyone knows the deal when it comes to Jon Jones.

UFC 139: Dan Henderson On His Way To Being The Greatest Fighter Of All Time

Like a fine wine, certain fighters only improve in quality with age.  Their seasoning allows them to grow as athletes and exceed even the greatest of expectations as they march forward.  They continually…

What would you say if someone told you there was a light heavyweight who many would agree was the future of the division? What if they told you he was an…

UFC Super 7: Six Of Seven UFC Champions Are Interchangeable, Who Should Move?

Reflecting on the evolution of mixed martial arts floods the fight fan with many fond memories regarding the history of the sport. Remembering the days of Gracie domination, Don Frye, Severn, Pride. There are many elements of MMA past that fight fans cherish as fight game lore.

Velasquez, Jones, Silva, St. Pierre...The List Goes On. Is This The Golden Era Of MMA?

There is an elevation that has taken place across the sport of mixed martial arts. That elevation has come with the understanding of what it not only once took to attain the highest peaks, not simply what it now takes to aspire to such heights, but what it will take tomorrow…

A veteran, an old lion like Quinton “Rampage” Jackson challenging a phenom, or a young lion like Jonny “Bones” Jones for his UFC Light Heavyweight Title might seem like a long shot to some people. Others see him as a maestro looking to hand down a hard taught lesson to the rising star. …

The career of Ryan Bader has known little more than absolute success. From his collegiate wrestling pedigree to his near perfect run in mixed martial arts, “Darth” Bader has represented excellence every step of the way.

Having suffered his first MMA loss to phenom Jon Jones,…

Jon Jones: I Could Have Finished Rashad Evans in Training 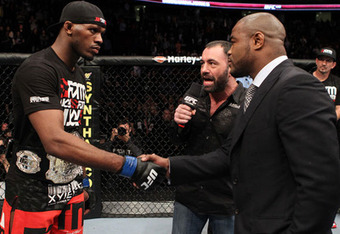 Let the fireworks begin between former teammates Jon “Bones” Jones and Rashad Evans as they prepare for their eventual showdown, tentatively scheduled for sometime later this year, likely in the Fall.